In September 2014 I went to Austria, thanks to a generous gift from my parents. I’d been reading the train options from the Man in Seat 61 for months, so was super-excited to be able to book a train-only option. (I tried to do it myself, but the combinations of Eurostar + sleeper + hotel were too complicated to risk a costly error – Railbookers were fantastic).

My route was London – Paris; Paris – Munich on the sleeper Cassiopeia; Munich – Innsbruck.

I must go back and visit Munich though – it was raining on the way out, and late on the way back – so I’m afraid I rather stayed in the station whilst waiting for connections. Arriving in Paris, I had some supper, and then, the really exciting bit, finding my berth on the train.

The sleeping cars all have their own attendant, but the chap looking after us was less than forthcoming with information. Still, he handed me the key, showed me how the door worked, and left me to it. It was dark by this time, of course, so there wasn’t an awful lot to see, but I rather enjoyed sorting the berth out and marvelling at the various switches and cubby holes. I am easily pleased… Not the best night sleep ever, an alarm (still no idea what it was for) sounded at about 6am, and we were an hour or so late into Munich. That was OK, as it was still raining, and I had a three hour wait for the Innsbruck train. Oh joy for a coffee and a seat to watch the world go by, from that well-known German chain… Starbucks…

Innsbruck train was clean, comfy and quick. I was reading a bit, with half an eye out of the window, when I suddenly realised that the mountains had started and their tops were behind the cloud line. The rain had stopped, so it was pleasant walking to the hotel which was right in the centre of Innsbruck. I had decided not to ‘put up at the Europe,’ nor to reserve myself a suite there in case any long lost relatives arrived, but you can’t deny, it is a hotel that is very handy for the station.

The hotel was super-central in Innsbruck – a view of the Golden Roof.

For once a single occupancy room had a nice view out the front of the hotel, not the bins or the car park which is what I seem to get (in Rome a few years ago, the room didn’t really have a window at all).  On Friday afternoon I wombled around Innsbruck, getting the lie of the land, and acquiring picnic provisions. I think for some people the prospect of eating in a strange place by themselves is what puts them off travel. One does have to be in a good mindset for it – take a book, prepare to be looked at, and most of all – one has to do the conversation about whether you like the look of the restaurant or whether the one a few doors down might be nicer, by yourself! And it can look a lot like unseemly dithering, too. Anyway, once that hurdle was cleared supper was scoffed and then an early night and generally being Rather Excited.

Because on Saturday… I went to Achensee.

Now, this is the bit where I talk about girls’ school fiction and everyone who isn’t a fan glazes over. I’ve been reading the Chalet School series as an adult for about 15 years.

Now, the whole point of the trip was to go to a place called Jenbach, get the rack and pinion railway to Achensee, visit Pertisau, and walk around the lake.

It’s where the first books in the Chalet School series were set, and I have wanted to go see it for myself for at least fifteen years. As you might imagine I was a teeny bit excited… so the 6:30 start to get the train from Innsbruck to Jenbach didn’t matter at all. Nor did the slightly long wait at Jenbach as of course I had been on an earlier train than was technically needed… time to mosey around in the gift shop, though. Turns out I was the only keen person that particular Saturday, and therefore had the entire train to myself. It really is a curious clunky ride, up through forest to the lakeside. The weather wasn’t brilliant – low cloud – so at one point we were enveloped in mist. It didn’t rain, and in the end the day was pretty good for walking and being outside without worrying about sunburn.

Pertisau – EBD’s Briesau – is a short walk along the lake shore from the railway terminus. Chalet fans will not have needed to be told that.

long the way, though, I wandered through a rather marvellous prayer/ reflection trail. I’d seen this on the tourist authority’s website but not been able to locate any English information – so had spent a couple of hours with a friend, Google Translate and a Bible figuring out what the trail involved. It was a mile or so path, with wooden sculptures or resting places, and biblical references for reflection. At the end was a striking crucifix, with Christ with an outstretched hand.

Away from the reflective trail I walked down into Pertisau, and sought out the tourism office and the commemorative plaque marking the inspiration the village gave to EBD. After checking the lake steamer times, I set off along the path along the shore towards Geisalm and the dripping rock. I .loved that walk, with the path rising and falling, and the lake and the mountains. Clearly it was the end of the season, as other walkers were few and far between. That meant I could have plenty of time to marvel at the Dripping Rock!

Lunch was the second part of the picnic, eaten on a bench at Geisalm. I had half a plan at that point to take the boat to the top of the lake, but was enjoying the walk a lot so decided to carry on. The clouds were gradually clearing throughout the day and although I never quite got to see the tops of the mountains I was more convinced they were there…

At the steamer stop I had a beer whilst waiting for the boat. Cold, but welcome after 7 miles or so! And a moment to look back down the path and see where I had been walking. Steamer to Achensee, back down to Jenbach on the steam railway (not alone this time) and then a proper train back to Innsbruck. I was shattered, but I had had a brilliant day!

Sunday was my day for exploring Innsbruck. There’s a discount card you can get, which gives free entry to the cable car as well as museums. The cable car gives brilliant views across the city and the valley, and I’m glad I decided to take the ride as I had been dithering a bit. Once back in the City I visited the folk museum, which more or less held my attention, and I had a picnic in the gardens for lunch. One rather nice random thing I found was an exhibition of maps and expeditions mapping various parts of the Alps; fascinating to see the way the maps were produced and used, and the kind of equipment the first mountaineers used (give me goretex and fleece any day…) 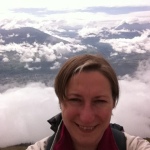 And that was it; the end of the trip was in sight. Train back to Munich would have been uneventful had I not managed to tip my glass of wine all over myself (oops) – hurrah for a handy suitcase and dry trousers. It was a bit of wait at Munich, so I had dinner in a fairly OK corner of the food hall, then found a bar for a beer. Then back on board the sleeper with a much more helpful attendant (she told me about the shower, which I hadn’t discovered on the way out). No early morning alarms on the return trip, so a much better sleep and then the ridiculous excitement of a shower on a train (see above re: easily pleased).

A British couple were in the compartment next to mine, and we’d had the kind of standard conversation you do in such situations (well, as much as possible when you know that your reality ‘I’m about to become a trainee vicar’ is a real conversation stopper…) and then horror of horror I realised they were on the same Eurostar back to London as me. So I did the only thing possible – hid round the corner to avoid having to have a conversation…

Eurostar back to London… on which I might have invoked European time to allow for a noon gin… and then all too soon I was back in London at the end of a brilliant break.