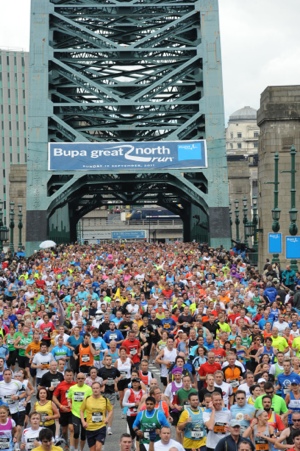 This is the image I would have spoken about at the closing panel had we had time. It’s last year’s Great North Run. Here’s the fuller version of the thoughts I had about how this relates to me and to our profession.

(I am in the picture – just left of the Stig, blue shirt, beige cap, but it is a bit of a Where’s Wally/Waldo? kind of game).

I used this image because I like to run. I am not fast and I have finishers’ rather than winners’ medals. But I can also draw some parallels here with the wider world of work which hopefully aren’t too hackneyed.

We all have to run our own race and play to our own strengths. I think we need to remember that a natural sprinter would struggle over a longer distance – that we all have natural talents and gifts. The challenge is to find the role that lets us play to those; to understand what we can work on and improve and what other things we’re just best off living with. I think this is a point Mary Ellen Bates made: Work on making your strengths stronger and don’t invest energy into your weaknesses that you cannot change – learn to live with them.

Be aware of the competitive advantage that others have – even if it’s not exactly your ‘thing’ – do they have better processes, resources? Are they keeping up with the race because they’re keeping up with the industry and if so, what tools are they using? Who are they coached by? Friends, family, professionals, membership organisations – all have a part to play at various times. If you have been mentored, when in turn can you mentor? Who can you encourage today?

Sometimes we’re in teams and sometimes we’re on our own – can you adapt your style to deal with both? I’ve recently been running with a friend who, for the first few times, apologised for being slower than me. Now that to me is daft – I wouldn’t have invited her to run with me had that been a problem; and the benefit of an early morning buddy far outweighs the disadvantage of a slightly slower pace. I’ve adapted to a different pace and to enjoy that run for what it is. In Chicago, I was the one slowing the group down.

Nothing is permanent. Everything is for a season, and expecting to be able to progress by standing still isn’t going to work. If I stopped on the Tyne bridge because I liked that view, pretty soon all the other runners would have moved on and I’d be out of the race. If I never invested in my own development and training, I’d soon be an ineffective or limited information professional.

One thought on “Closing Panel at SLA Chicago – updated”